A picture perfect absolutely stunning weekend!  16 of us travelled down to Ohakune for a weekend of cycling and walking and what a weekend it was!  We found out when we got there that the Old Coach Road that we were meant to be cycling along had suffered badly from the major rainfall they’d had in the last week and so we now there was Plan B.  As it worked out, Plan B actually turned out way better.

The 3 carloads arrived within half an hour of each other and we soon made ourselves at home at our Mountain view Lodge at LKNZ.

We soon all got chatting and mixing and mingling  over  our complimentary drinks and our bar meals.

The next morning we were up early (ish) to a bit of an overcast day that soon cleared to give us a “one out of the box” picture perfect day.  Our Plan B route took us through back roads, dirt roads, “paper roads, around lakes and back into Ohakune .  And as we rode along with skylarks chirruping above our heads, Mt Ruapehu smiled down on us, her snow capped brilliant whiteness stark against the brilliant blue sky.  (I think we spent more time taking photos than cycling!) 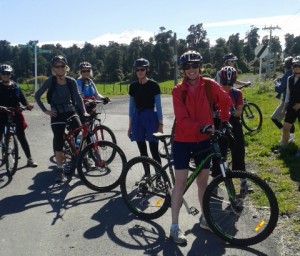 Lunch stop was atop the highest hill in the district where we surveyed the beautiful valley/basin below us.

to the viaducts on Old Coach Road. 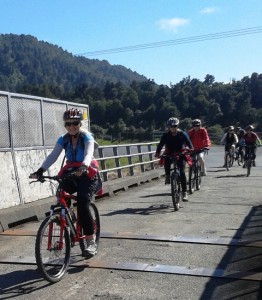 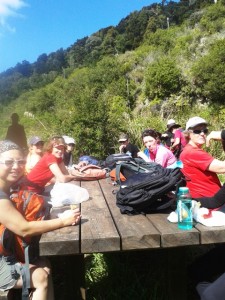 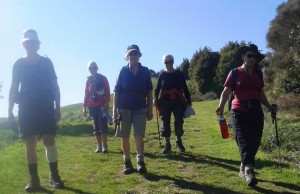 To receive my e newsletters with all the next upcoming adventures

Give Me A Call